Monday did not bring its usual gloom with it. Not where Foluke was concerned. She skipped along the sidewalk, her hand firmly in her mother’s warm grasp. The pleats in her uniform stood proud and straight, belying the worn-out patches that told of the number of older sisters who had washed and starched this same garment with care in their own time, just as their mother had taught them.

“Mummy, I can name everything that is here. See, there is a house, that is a car, this is a bucket, that is a gate. Mummy say after me, car…” Her daughter’s excitement at finally getting into Primary Two was infectious, but Mrs. Lawal was not in the mood, not today.

“Baby mi I’m not in the mood now”, Mrs. Lawal tried to quicken her pace. Foluke’s school was still miles away.

“Mummy mi why are you not in the mood now?” Little Foluke went on naming objects. “…flower, waterproof, dustbin…”

“This one is not a dustbin, it is a refuse dump. The dustbin is the small one that is in the house. See how they littered the street with the trash here.”

“Mummy why are you not in the mood now?”

“That is because we are late.”

“Mummy why are we late? We woke up since!”

“Yes, but we can not enter bus today.”

“Why can’t I ask you why you don’t have enough money today?”

“That’s because I don’t want to answer.”

“Don’t worry Mummy mi. You don’t need to answer. When I grow up I’ll give you plenty money.” Foluke broke free from her mother’s grip to spread her hands wide as she said ‘plenty money’.

Mrs. Lawal broke into a smile, scooped her youngest daughter into her arms, schoolbag, lunchbox and all, and hugged her close.

“God bless you my daughter.” 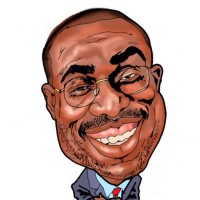